Well, like a good part of the country, we’ve had a LOT of rain here in the Finger Lakes Region of NY. So much so that there is flooding everywhere. The lower portion of my property, where I’ve restored about 8 acres of wetland and 12 acres of grassland, is bounded by the Clyde River and the Montezuma National Wildlife Refuge, so you can imagine what it looks like right now. I estimate that about 30 acres are flooded, as well as the entire wooded wetland on the Refuge (~50 acres) and another 15 or so on the neighbor’s field to the north.

Yesterday, I put on my waders, took my shotgun, and waded several hundred yards through thigh-high water to see if there were any ducks. The flooded woods to the south were alive with squealing Wood Ducks, and several flocks of mallards were working the flooded bean fields. I never fired a shot, just watched and listened in amazement for over an hour.

This morning was a different story. It was raining and overcast when I left the house well before daylight. I had to work my way through deep water covering my lane to get into position. (I must say it was a bit spooky in the dark, not knowing exactly where the lane was, also knowing there are areas of deep water on either side). I finally found my way to the spot I had decided upon. I was standing in reed canary grass with some Phragmites mixed in for cover. This is normally difficult to get through, now made even more difficult by waist-high water. About a half hour before ‘sunrise’ the birds began flying. I was buzzed by dozens of Wood Ducks and some small flocks of mallards. There were also a few flocks of teal that moved on through. I harvested a nice pair of Woodies and a drake Mallard. I had more opportunities to get Wood Ducks, but passed up the chance, satisfied with what I had. The trek back to the house took a lot longer than the hunt.

The images include a view from one of my ‘deer’ stands and of my harvest. A good day for ducks! Now if only the water subsides quickly so I can hunt deer next weekend… 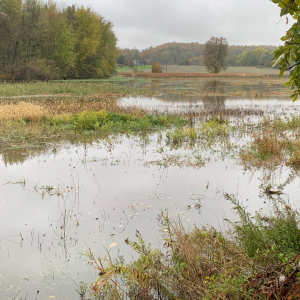 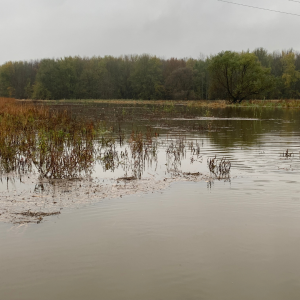 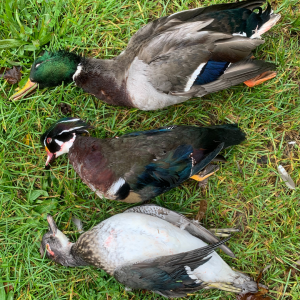