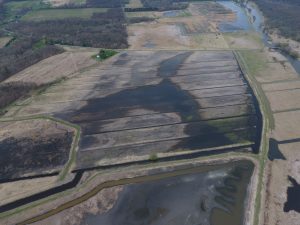 Natural wetlands regularly undergo changes in response to weather patterns. Dry spring or summer weather for an extended period results in lower water levels. This normally brings about rather drastic (and beneficial) changes in the wetland’s water chemistry and also the vegetation. After long periods of time without a dry period, wetlands can become stagnant, resulting in a reduction in plant and animal diversity. The drying out of exposed areas in times of low water will rejuvenate the substrate. Annual plants whose seeds have lain dormant for several years are now free to germinate on moist soil. Nature thus rejuvenates itself.

In restored wetland areas (e.g. on state wildlife management areas or national wildlife refuges), water levels are manipulated by personnel via water control structures. This makes them less subject to weather extremes. This is good from the standpoint of maintaining wetland areas through periods of drought to sustain wildlife populations. However, just as in natural wetlands, long periods without water level fluctuations can result in stagnation and loss of plant and animal species diversity. 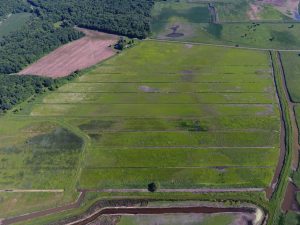 Enter the “drawdown.” Area managers can mimic a natural drying out of the wetland by a complete or partial drawdown of the water from a managed impoundment. Nutrients locked up in the substrate are released. The soil is rejuvenated. The seeds of annual plants which have been lying dormant germinate in the moist soil and create lush “meadows.” When the areas are re-flooded in the fall, waterfowl eagerly feed on the seeds produced, fueling their bodies for the upcoming migration. Perennial plants also benefit from the newly-available nutrients and moist soil conditions. The wetland is once again healthy and diverse, and wildlife responds.

A question wetland managers frequently get is: “Why is my favorite birding/hunting spot suddenly dried out?” The area is most likely undergoing a drawdown. In larger managed areas with multiple impoundments, only a portion is drawn down any given year so as not to devastate wildlife communities. However, if you have a small managed marsh on your property that needs to be drawn down, you probably don’t want to lose all your habitat, even for one season. A partial drawdown, just exposing the shallow edges of your marsh, may be the answer. You will get similar results on a more limited basis while still enjoying the amphibians, reptiles, birds and mammals that use your wetland.

Remember, habitat is always the key to healthy wildlife populations!