To help people identify and appreciate waterfowl (ducks, geese, and swans) and their habitats.

Professor Duck’s vision is to educate youth, first-time hunters, beginner (novice) bird watchers, and others to promote the importance of conserving waterfowl and their habitats for future generations. 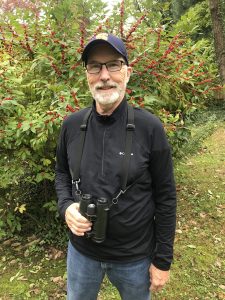 Dave Odell (a.k.a Professor Duck) holds a Bachelors Degree in Zoology from Houghton College and a Masters Degree in Zoology (emphasis: wildlife management) from the SUNY College of Environmental Science and Forestry in Syracuse, New York. He is retired from the New York State Department of Environmental Conservation where he served as a Wildlife Biologist and Regional Wildlife Manager. Much of his 35 plus year career involved the management of wetlands and waterfowl, along with other wildlife species. He helped create and then taught the waterfowl identification portion of the New York Sportsmen Education program. He also was instrumental in launching and overseeing the New York portion of the Montezuma Wetlands Project.

Dave and his wife, Rebecca live near Clyde, NY where they run a hobby bed and breakfast called the Old Duck Inn and they manage a small farm for wildlife. He loves bird watching, wildlife photography, hunting and spending time with his children and seven grandchildren.