A Look into Artificial Nesting Structures

A Look into Artificial Nesting Structures

As a professional Wildlife Biologist and former NYSDEC Regional Wildlife Manager, I was always a bit reluctant to utilize artificial nesting structures, preferring to create or restore essential habitat. For many of the bird species of concern on state and federally managed lands, natural grasslands are the ticket. Mallards, Black Ducks and nearly all the rest of the puddle (dabbling) ducks nest in dense grass or forbs adjacent to wetlands. “Build it,” and they will come! We’ll discuss this at greater length later in this message.

For puddle ducks, there is one major exception to grassland nesting, and at one time the very existence of the species was at stake. The Wood Duck nearly always nests in tree cavities. For nearly two centuries, settlers and colonists used the vast timber resources of the New World for homes, heating, ships and masts, coke for smelters, etc. By the end of the 19th century, the eastern deciduous woods, once stretching uninterrupted from the east coast to the banks of the Mississippi River, was nearly gone. With it went the natural tree cavities which Wood Ducks needed to survive. In fact, a major factor that influenced passage of the Migratory Bird Treaty Act early in the 20th century was the near extinction of the Wood Duck. 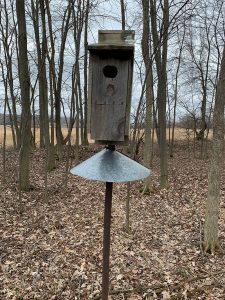 A good example of a Wood Duck nesting box with a predator guard.

It was all well and good to protect the Wood Duck and the other migratory birds, but we could not grow mature trees in time to have any impact on the Woodie population. Enter the Wood Duck box! The construction and placement of 100s and even 1000s of these in and around wetlands in the Eastern U.S. forever changed the outcome of what might have been the extinction of one of our most popular waterfowl. Woodies eagerly accepted their new homes, and scientists had a chance to more easily study their nesting habits. With the re-growth of the forests in many areas, the Woodie is no longer in trouble, and the familiar boxes are no longer necessary to insure its survival. 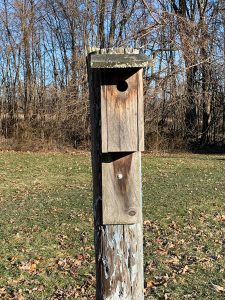 Here is an Eastern Bluebird nesting box mounted on one of our fan’s property in New York.

A similar story can be told about the Eastern Bluebird. When I was a child, it was a rare event to see a Bluebird in Western NY. Old orchards and wooden fence posts were disappearing, and the birds were all but gone from the landscape. Enter the Bluebird nest box program. Thousands of these were placed in open habitat along lawns and roadsides. The Bluebirds responded, and now they are a daily sight practically everywhere. A good result for the official NY State Bird! For more information, including box plans and placement, visit www.nabluebirdsociety.org

Getting back to the grasslands, early natural resource managers had an issue to deal with that wasn’t immediately apparent. Wetland acquisition, restoration, creation and enhancement cost a lot of money (it still does!). This often meant that there was little or no time or resources left for managing the surrounding upland areas. Wetlands seemed to be the essential ingredient for attracting and managing migratory birds, but without adjacent dense nesting cover, little reproduction took place. Agencies sought to create grassland areas, but again time and money were often limited.

A novel approach to the lack of dense nesting cover adjacent to newly-created wetlands was a device known as the nesting cone, nesting cylinder or Dakota hen house (see image). Basically, it is a cylinder (or plastic mail-box type) that has a double outer layer stuffed with straw or the like. A central area is filled about half full with straw or grass or other nesting material. It is suspended above the marsh on a tripod made of electric conduit, which makes it nearly impossible for a raccoon or other mammalian predator to gain access. The plastic hen house is normally mounted on a single post, and thus should have a predator guard mounted on the pole below it. 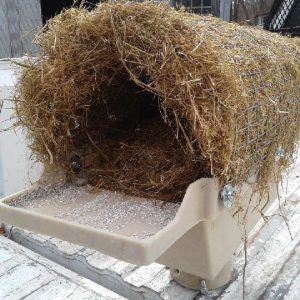 Side view of the plastic mailbox hen house structure.

Once inside, the hen is shielded from above which means that avian predators seldom spot the bird. The great benefit to these devices is that the nesting success is often in the 90% range, while it seldom reaches 25% in natural grasslands due to predation. In my experience, the Mallard is the main species which uses these, although I’ve occasionally seen other species use them, including Black Ducks, Wood Ducks and Hooded Mergansers. If you’re interested in learning more about these devices, including construction and placement, visit www.flwnywfowl.org  or www.deltawaterfowl.org/hen-houses  or contact Dakota Nesting Structures at (701) 845-5457.

So, although I like things natural, there were and still are some valid reasons for resorting to ‘artificial’ means to help manage waterfowl populations.