Biologists and naturalists have always been fascinated by bird and other animal migration. In the past, bands or tags have been placed on birds or animals. In order to collect data about that creature, someone must find, harvest or re-capture the animal. Unfortunately, that only gives the scientist a few data points: when and where the animal is tagged, and when and where it is re-captured or recovered.  Large neck collars on geese made it possible to get a few more observations visually, but not nearly enough to understand more subtle movements, and certainly not at night.

The radio telemetry era took this process a giant leap forward, by which movements could be followed if one could get the receiving antenna close enough to the animal wearing the transmitter. Early transmitters were bulky so they could only be placed on critters large enough to handle the extra weight. Gradually, smaller transmitters were perfected. Some of the larger ones could be picked up via satellite, but they were extremely expensive.

Enter the age of nanotechnology! 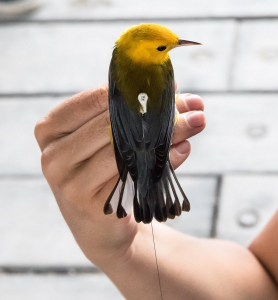 Relatively inexpensive transmitters can now be made that are only 1/200th of an ounce! This means that all birds and even some larger insects can have transmitters attached. Stationary automated receiving towers are placed at locations along known migration routes and at other prominent spots on the landscape. These ‘search’ for ‘hits’ 24 hours a day, which is essential, since many birds migrate at night. Currently, the signals can be detected up to about nine miles.

The automated receiving equipment is small and can be solar-powered. It can be attached to existing towers or even buildings. As the network of receiving devices expands, more data result in a better understanding of an individual animal’s movements. There is no limit to the breadth of information that can now be collected to help monitor species and their response to changing environmental factors such as food supply, cover, vegetation or climate.

If you were wondering, Motus is the Latin ward for movement or motion.

For more information, go to http://www.motus.org