Trumpeter Swans: An Inside Look

Trumpeter Swans: An Inside Look

While walking my property in southeastern Wayne Co., New York, I frequently see and hear Trumpeter Swans (Cygnus buccinator). A few days ago, I was sitting in some cover by the river with my dog. I was texting to someone when the dog began to bark. A family of four swans had silently paddled within about 25 feet of us! When the dog barked, the cob (male) took flight down the river, while the pen (female) and the two cygnets (young) moved slowly away. The male circled back towards where we were, called, and the rest of them took flight and followed him. What an amazing sight!

The largest waterfowl in the world, and one of the largest birds capable of flight, adult male Trumpeter Swans regularly tip the scales at over 26 pounds, and have been known to reach 38 pounds! Their wingspan often exceeds 8 feet. These all-white birds hold their long necks erect while swimming. The bill is black and long, giving their head a wedge-shaped profile similar to Canvasback ducks. The young are usually mouse-gray or brownish. Their deep two-syllable call, ko-hoo, has been likened to a “Tijuana Taxi.” I think the ones that have taken up residency near my home recognize me, as they often call once or twice while flying overhead when they spot me walking down the lane toward the river. I never cease to be amazed when these majestic birds fly over. How can something that big actually get airborne! 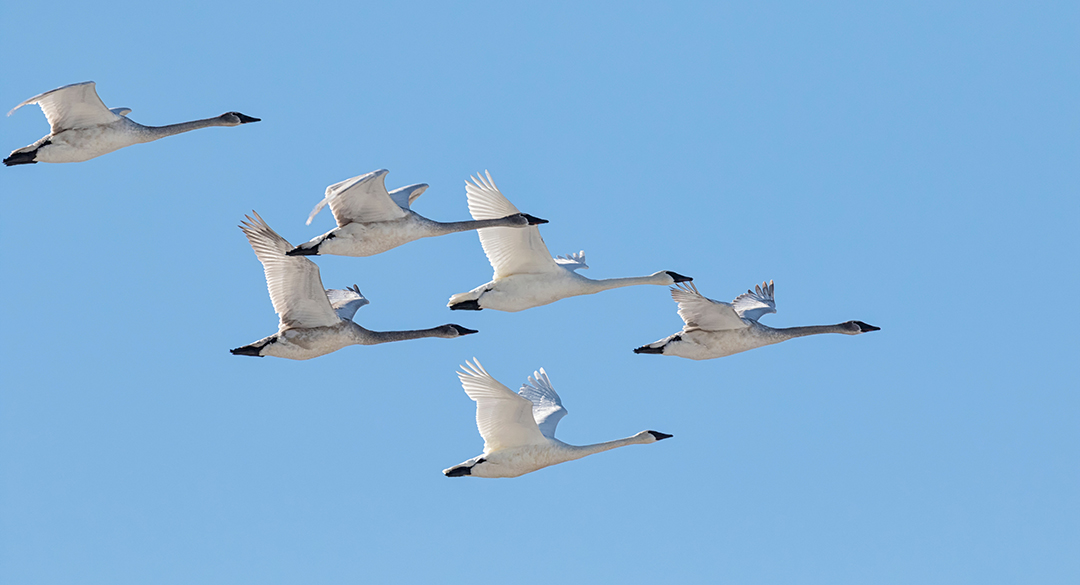 Trumpeter Swans were thought to be on the brink of extinction in the early 1900s. By 1932, there were only about 70 left in the lower 48 states, in the vicinity of Yellowstone National Park. Trumpeter Swan restoration efforts began later in the 1930s, when the Red Rock Lakes National Wildlife Refuge was established to protect the existing population there in Montana. However, a previously unknown population was discovered in Alaska in the 1950s, which gave added hope that the species would survive. By the 1960s, the population had grown so that biologists were able to trap and transfer pairs from the Red Rock Lakes NWR to other areas. The Trumpeter Swan Society was formed in 1967 to promote restoration efforts nationwide. One aspect of that consisted of moving eggs from Alaska, which had a population of 10,000 swans, to nests of Mute Swans for incubation and rearing in target areas. Also, as populations increased, pairs were translocated to other suitable locations.

Restoration programs in the Canadian province of Ontario, and states such as South Dakota, Iowa, Wisconsin, Michigan and Ohio have been highly successful. Three populations are identified: the Pacific Coast, the Rocky Mountain, and the Interior. By 2010, the swan population had risen to 46,225 thanks to the efforts of biologists and volunteers. (Ducks, Geese and Swans of North America, Baldassarre, 2014).

One concern of waterfowl biologists is that many of these restoration efforts have created local populations of swans, but the birds are not true migrants. While the species’ long-term viability would best be ensured if they migrated, they seem to be hearty enough to survive as long as there are open water areas for them to utilize. Whatever the case, the recovery of these birds is a success story that we all can be proud of. Hope you are in an area where you can see them regularly!