Deer Ticks: The Good, the Bad and the Ugly

Deer Ticks: The Good, the Bad and the Ugly

Hunters, hikers and anyone who spends time in the outdoors will inevitably encounters ticks. Ticks are arachnids (like spiders) that are external parasites living off the blood of animals. There are many kinds of ticks, but the dog tick and black-legged tick (aka deer tick) are carriers of Rocky Mountain spotted fever (RMSF) and Lyme disease, respectively. As RMSF is quite rare, most of us are more concerned about contracting Lyme disease from the deer tick.

The deer tick is very small, young often about the size of a poppy seed. Adults are slightly larger – males about 1mm and females about 2mm – not much bigger than a sesame seed. The small size makes them easy to overlook on your dog or yourself. A female fully engorged with blood from a host can be 10 mm in length.

Deer ticks carry a bacterium known as Borrelia burgdorferi, which they get from infected wild animals that they feed on, such as deer, mice and birds. When a tick bites you, it attempts to bury its head and mouthparts into your flesh. A tick can be somewhat easily removed if you detect it before it buries into you. Once the head is embedded, the tick is difficult to remove without breaking it so the head remains in your body. If left totally undetected, the tick will eventually become engorged with its blood meal and drop off to lay its eggs.

If you have been bitten and infected with Lyme disease bacteria, the site usually, but not always, displays a round red rash that looks like a bullseye. This is generally 2 to 2.5 inches in diameter. If you see this, get to a doctor as soon as possible. Normally, a two to three week regimen with the antibiotic drug, doxycycline, is used as treatment.

In the past, Lyme disease was not regularly seen, especially in more northern areas of the country. Because of this, the disease was often mis-diagnosed, since it has symptoms similar to arthritis, lupus, chronic fatigue syndrome, MS and fibromyalgia. Blood tests can be used to indicate if you had or have Lyme disease. There are several different tests, but a combination of tests is usually required to be certain. Often, it takes 4 to 6 weeks for the antibodies to Lyme disease to show up in your body, so make sure your health provider follows up with the appropriate bloodwork. After all, it’s your health that’s at stake! 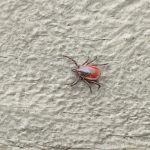 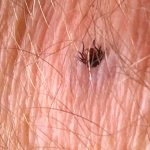 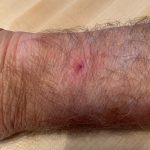 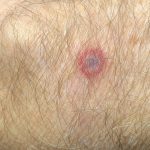